Member of the Week 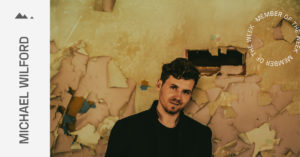 “Michael Wilford is an innovative and exciting new face in the Canadian music scene. Michael grew up in Smithers, British Columbia, a little mountain town filled with folk music and protest songs. He credits his exposure to world-class artists in a small-town setting as one of his major inspirations to pick up an instrument at a young age. Now based in Victoria BC, he pursues music full time and uses his collaborative approach to songwriting to celebrate the talent and diversity of BC’s artists.

In February 2021 Michael released the swampy, blues-inflected track “Scotch” featuring Chelsea D.E Johnson’s powerful vocals. The song received some serious press from a slew of media such as CBC, Victoria Buzz, and Rock Era Magazine. It peaked at no. 78 on the Canadian Radio Top 100 Alternative Songs Chart and garnered an honourable mention in the International Songwriting Competition where it was judged by icons such as Dua Lipa, Tom Waits, and Coldplay.

Michael will be releasing his sophomore single, “Rattle My Bones” which features the brooding baritone of Sail Cassady in October of 2021. His darkly cinematic songwriting and his collaborative approach to music-making are quickly turning him into an artist to watch.
”

Member of the Week: Raincity

Amplify BC Fund Renewal 2021: We need your help!

A letter from the Executive Director, Music BC Industry Association Dear music industry colleagues, As many of [...]

Teon Gibbs & preme crafted this lyric mashup for the one and only Shay Mitchell!

Music BC Member Teon Gibbs & preme crafted this lyric mashup for the one and only Shay [...]

Getting social with Music BC

Our members are involved in all areas of the music industry. Whether you are artists, bands, individual musicians, agents, producers and engineers, join Music BC to enjoy membership benefits such as:

Become a Music BC Member
Learn more about Member Benefits

View All our Partners
Go to Top